I’ve been a fan of computers for longer than I care to remember, since Majel Barrett (Roddenberry) was the voice of a talking computer on the Starship Enterprise. Before the days of MS-DOS. When the punch-card reader was still a valid input device. The first computer I owned was a TRS-80. 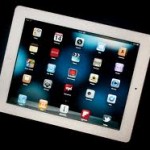 A couple of years ago I was introduced to the iPhone 3G and immediately had to have one. I’ve been using these little iOS devices ever since, my current collection includes jailbroken iPhone 4 and iPad 2. One thing that’s striking about iDevices is their ease of use. From the first touch, I was somehow already familiar with the interface, though at the time I did not realize why.

Recently while sorting the bookshelf I came across a copy of Microsoft Windows 3.0 I bought on launch day back in 1990. Then the realization hit me. If you are old enough to remember Windows 3.0 and its Program Manager, you will instantly understand why the iPhone’s interface seems familiar. It’s because twenty years later, the typical smartphone interface is roughly equivalent to Windows 3.0 running DOS-based applications. Consider these striking similarities between Windows 3.0 and iOS 4: 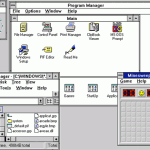 Sure, an iPhone has better graphics, it’s portable and has a touchscreen instead of a mouse and keyboard. But the actual way you get things done is so retro as to be laughable, when you think about it. The interface Apple calls “magical” today, Microsoft did twenty years ago, and has far surpassed since then.

Don’t get me wrong, I use the newest Windows, iOS, and MacOS X on a daily basis, and absolutely find good, valid uses for all of them. The current batch of portable devices are great, but it seems there is quite a long way to go before a phone or tablet can completely replace a “real” computer. I look forward to using the portable devices of the future, when they will inevitably catch up to and surpass their bigger cousins.

Update 2016: I hardly touch the Apple devices anymore since I discovered tablets and phones that run Windows. And iOS still looks antique. And you still can’t get a Mac with a touchscreen.

Update 2019: I have an iPhone again, because Microsoft abandoned the phone platform. iOS still looks no better and Mac screens still can’t be touched. – posted from my Microsoft Surface Pro, a touchscreen tablet with detachable keyboard which runs Windows.

This entry was posted in Apple iDevices, Computers, Technology. Bookmark the permalink.
Avatars by Sterling Adventures